This episode is part one of a three part interview with my co-author Rick Hicks on our new book Launch Your Encore: Finding Adventure?and Purpose Later in Your Life. You can get more information on the book at it’s website: Launch Your Encore.com.

Rick and I met about 20 years ago at a conference for?leaders of missions organizations. After several discussions on Baby Boomers and what to do when you get to the end of your career, we?began outlining and creating the book.

Who is Rick Hicks

Rick was the Dean of Students at Viola University. Following that he worked for Forest Home Christian Conference Center, working with people of all ages at this family camp. He was President of Operation Mobilization (OMUSA) for 14 years. Even though Rick had plenty of energy he felt like someone younger should step in and he should move from the “command and control” capacity to a more advisory role. His job now involves sharing his?experiences and mistakes he has made so that he can teach others.

Rick grew up in the hippie movement of the 1960’s in a turbulent situation. He was kicked out of high school and later junior college. After a period of maturing and finding himself spiritually he went back to school and got some great advice from his Dad: “just do what you like.” So he got a degree in recreation which may sound silly, but it led to him examining why people are different at different ages. Rick went on to a Masters in Sociology focussing on student development and then a PhD in organizational development and how people grow over time and apply that to their work. He studied under Peter Drucker, one of the foremost experts in how to deal with people.

Drucker spoke about people having three halves of life, the third half being the period after our career ends, which can be as long?as 20 years today, where in the past people tended to die shortly after their career ended. 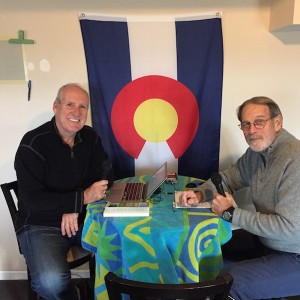 Part of the idea of this book is to start thinking about what you want to do when you get into your 60’s and 70’s and can back away from your career into a time when you can make more choices about what you do and how you influence people instead of just?working.

During my studies and then later throughout my career I have?noticed that many people and companies do not do well with leadership change. Many people hang on too long and don’t hand over the reigns so someone else can begin their vision.

Rick says that as we come to the end of our careers the idea of a retirement of just sitting on the beach watching the world go by is pretty shallow and becomes?boring pretty quickly. This book is about how to find the meaning and purpose in that last 20-30 years after the career is over. There is a whole new paradigm for how people live after their career, how things change and how they can navigate this third half of their life. This book is designed to help you create a roadmap to answer the question “what’s next?”

Over the next two episodes we are going to unpack the concepts of this book in greater detail. Tune in to learn more about the shifting retirement paradigm and how you can launch your encore in the third half of your life!

All Posts »
PrevPrevious54: Dirty Delegation – Mother of all leadership sins?
Next56: Finding Adventure and Purpose Later in Life, Launch Your Encore, Part IINext