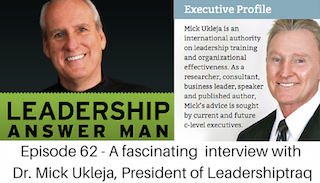 This week I have a great interview for you with Dr. Mick Ukleja! Dr. Ukleja is a Consultant, Teacher, and Writer who studies and teaches leadership and works extensively with Millennials as they are the future of the workforce.

Dr. Ukleja recently read Simon Sinek’s Leaders Eat Last, which is about developing a circle of safety in your organization so you can concentrate on the real problems outside the organization.

One of the best pieces of advice Dr. Ukleja’s ever received was from John Wooden: “The moment your past becomes more exciting than your future is the day you start to die.”

Mick Ukleja is founder and president of LeadershipTraQ, a leadership-consulting firm based in California. He hosted LeadershipTraQ Televised, an interview-format talk show in Southern California that profiled outstanding leaders. He helped found the Ukleja Center For Ethical Leadership at California State University, Long Beach, the second largest university in the state. His book, Who Are You? What Do You Want? Four Questions That Will Change Your Life, has been praised by legendary coach John Wooden, Grand Slam golf champion Gary Player, and many prominent leaders and CEOs, as ?The one book to read that will immediately impact your life.? Mick has also co-authored two other books, The Ethics Challenge, and Managing the Millennials.

Mick has worked with entrepreneurs and corporate executives of businesses and organizations in the non-profit and for-profit sectors. He serves as Chairman of the Board of Trustees for the Astronauts Memorial Foundation at the Kennedy Space Center, which oversees the Center for Space Education. Mick holds a bachelor?s degree in philosophy, a master?s degree in Semitic languages, and a Ph.D. in theology. He received the President?s Distinguished Service Award from California State University, Long Beach in 2002, and in 2006, was named Distinguished Alumnus from the College of Liberal Arts.

Mick has been featured on Fox News, CNN, Fox Business Network, NBC, and in numerous publications. Click on this video to know more about LeadershipTraQ?s founder and President.

All Posts »
PrevPrevious61: Do Leaders Need Thick Skin?
Next63: Learn to Lead: Ten Essential Skills Every New Leader Must Master: Listen and LearnNext