Home » 47: Seven Deadly Motives for Being in Leadership

47: Seven Deadly Motives for Being in Leadership

Do you know that there are wrong and right reasons for leading??? You probably know some of the right reasons – calling, gifting, wanting to make a difference, stepping into a leadership vacuum, clearing up confusion, wanting to help everyone succeed.? But do you know that there are deadly wrong motives that keep a lot of people in leadership too long??? And those kind of leaders are tough to follow!

This is a continuation of my series on the power of passion in leadership. In the last podcast episode?I laid the ground work for this subject, this week I want to delve deeper, discussing finding your passion at work.

In this episode I cover:

In my career of leadership I have had seasons of great passion as well as seasons of burnout. I’ve had great mountaintops and deep dark valleys. I think that’s a normal part of the ebb and flow of leadership. As a young leader I remember people flocking to hear me speak, hanging on every word and sensing the contagious energy of my vision. I felt a bit like the Pied Piper, drawing everyone around me to join my gang. But I can also tell you about the days when I lost my passion but kept trying to lead with my head instead of my heart. I knew it and they knew it. Sometimes followers cannot leave leaders because their jobs are at stake. Or they don’t want to leave their church even though they no longer like the pastor. So they stick around but lose all enthusiasm for the leader of their ?band.?

You remember that photograph that Marty McFly had in the movie ?Back to the Future,? the one that he kept in his back pocket? It was a picture of him and his family. He would take it out and look at it and he would see his family members, and even himself starting to fade from the picture, as he was messing with the history of his own family. That’s how I felt when my passion ran out. I was physically there but emotionally gone. I was fading away and felt trapped, not really knowing what to do about it. I was there in my head but I was not there in my heart. Have you ever felt like that?

When who we are lines up with the role we are in, then we are in a place of passion. The less overlap, the less possibility of a fulfilling role in leadership. The more these two circles overlap, the better. And I have noticed that as we grow older, who we are really changes. We have different motivations in our 50s and 60s than we did in our 30s and 40s. Take a look at these two circles and think about your own situation. Are your circles close to a complete overlap? Then you are living your dream. 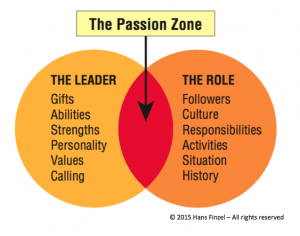 Try this exercise. ?Take a blank sheet of paper and draw your two circles. Think about how much of who you are lines up with what you are doing for your day job. ?If there is a lot of overlap, then I would say you enjoy your work and are living inside your passion zone. People ask me, ?Can I get to a complete convergence of who I am and what I do in my career?? ?I would say that if you are 75% there, then you are in great shape. ?It is really hard to find a job, especially as a leader, that always allows you to do 100% of what you love every hour of every day. ?Servant leadership requires us to do some things that are really important but not necessarily enjoyable. 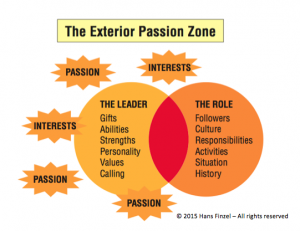 Let me?to introduce you to Jack, a leader who is so very miserable in his day job. ?When I asked him what he really loves, he told me that he teaches in the evenings at a junior college. ?He lit up and told me that he would love to figure out a way to do that all the time. ?Sometimes we find ourselves in a place where what we enjoy most is completely outside of our current job description. ?Our real passionate interests are totally in another place. ?They lie on the edges of our work. ?Our reality looks like this next diagram, where we seem to have the most passion around things that are not even part of our jobs. ?If you are in that place, it might just be time to move from your day job to your dream job.

At one point in my career, I found that most of the things that fueled me were those outside stars of interest. Almost everything inside my day job either drained me or bored me. I kept being drawn in my heart to those outside interests. When your passion is gone you have two clear choices: get it back or get out. The worst thing you can do is to continue to lead with a heart that is dried up. You’ll be miserable but not as miserable as your followers! Make the leap, as Steve Jobs goes on to say,

“And the most important, have the courage to follow your heart and intuition. They somehow already know what you truly want to become.”

A few weeks ago, in a church just down the street from me, the elders called the pastor in for a meeting and dismissed him. No explanation other than, ?We don?t think you?re the person to take us where we want to go in the future.? It was not really a blow out, but a slow leak. The leader had dried up and everyone knew he was no longer vibrant. He had lost his passion but kept going through the motions hoping no one would notice. Oh boy, did they ever. Sadly he was ambushed and dismissed instead of helped that night. Another pastor tossed on the heap of used up Christian leaders.

You might be at this crossroads. I get it. You have two choices to make. Whatever you do, make one of the two. The worst mistake is to do nothing. Time will not take care of it. I have watched many a leader crash and burn because of pure denial that he or she had a problem. And some of my closest friends have been fired like that pastor, in an ambush from which it takes years to recover. I hope with all of my heart that you never end up being tossed on that heap of used up leaders.

My mentor in graduate school, Howard Hendricks, has some classic quotes about this:

You have probably all heard that famous analogy, ?Have you climbed to the top of the ladder of success only to find that it is leaning against the wrong wall?? I was on a podcast interview the other day and the podcaster asked me what that meant. He had never heard that before. I said, ?It means you have found success but not significance. By the world?s standards you look successful, but you are not happy.?

Perhaps you realize your ladder is leaning against the wrong wall, even if you have not yet reached the top. You have nagging doubts that you are really on the right track in your career. But you don’t quite know what to do. You know something needs to change but the how and the what has you stumped. And you have obligations and a family. It’s hard to step out by faith and begin again on a new ladder, especially from a comfortable secure job, to pursue a passionate calling. Sometimes we have to be painfully pushed out to really find that great new place that is waiting for us. My friend, Bethany, recently quit her job working for an amazing on-line internet superstar. She was making great money, but was not really happy helping someone else build their empire. A lot of people trade hours for dollars to make other people succeed at their dreams. Bethany decided she wanted to start her own business and took the leap. She and I were laughing the other day at a Google Hangout with some other solopreneurs (People that are solo working entrepreneurs). ?We are making twenty percent of what we used to make but we are eighty percent more fulfilled.? I told her?

The money will follow where passion leads the way.

A personal friend of mine is working as a VP in a place of misery right now that is driving him crazy. He is trying to find another job, but in the meantime he suffers under very poor passive leadership. The owner/founder of his company has run out of gas. Now in his mid-seventies, he has lost his passion for the future. He has all the money he needs, but can?t let go. He really should get out of the way but he doesn’t. So everyone suffers. The passivity at the top flows all the way down the ranks?is it any wonder the company is losing ground and drifting? This owner loves the company he founded but today is hurting it more than helping as he maintains a strangle hold on management. He has worked so long and so hard to grow his baby, he just cannot let it grow up and leave his nest. This is what is known as the founder?s trap. It is hard for founders to let go of their ?babies? when it is time for them to leave the nest and to fly out on their own.

So, these are the seven deadly motives I?ve observed for hanging on to position when your passion is gone. And sadly, I can say I have been guilty of all seven at one time or another in my career:

My ?Life is Good? baseball cap spoke to me: ?Hans, follow your heart.? It was really God?s voice telling me that I should do it and that He would take care of me. Yes, I heard Him loud and clear, but obedience?well, that is another matter and that took me a long time. Giving up the things on this list is not for the faint of heart. It was obvious to me that I had so much to lose and something very vague out there to gain. I became a professional fence sitter. Can you relate?

I love what Steve Jobs said about loving your work. Don?t settle.

?Your work is going to fill a large part of your life, and the only way to be truly satisfied is to do the work you believe is great work. And the only way to do great work is to love what you do. If you haven’t found it yet, keep looking. Don’t settle.??Steve Jobs

All Posts »
PrevPrevious46: The Power of Passion in Leadership
NextMy story is featured on the “Entrepreneurs on Fire” podcast with John Lee DumasNext