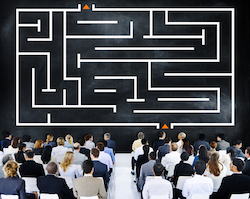 Just to reference where we are in this 10 part series: Learn to Lead: Ten Skills Every New Leader Must Master

There are two ?E?s? in leadership! An important letter.

Today?s show is brought to you by the second ?E? in LEADERSHIP! E is for Effective Communication!

“The single biggest problem in communication is the illusion that it has taken place.” – George Bernard Shaw

Listener feedback related to this series and this issue!

From: Tim
Communication- Effective communication is essential in all relationships. Be able to set clear expectations (sending) and be a good listener (receiving).

From Rev Gibbs
Looking forward to your upcoming series. In my humble opinion, I believe the single most important skill is Communication. Wow! So many others that come to mind, but I think a leader’s ability to communicate with clarity and consistency is vital. Many thanks for your podcast! – The RevGibbs, Tallahassee, Florida

Part 1: Why communication is so important for leaders

About five years into our project in Vienna, we were beginning to sense growing pains. We invited a management consultant to come in and spend a day with our top leadership. We sat in a circle around a large conference room table and began to talk about fundamentals of the organization.

The consultant asked us each to write down the core purpose of our organization. Then we went around the circle and read what we had written. Not two of us said the same thing, and some were far afield from the others! No wonder there was so much chaos among us! Like the strings of a guitar that lose their tuning, we had lost our harmony as a leadership group. You know you?re in trouble when your top leadership is confused about such fundamental issues as the core purpose for the group?s existence!

The other big problem is that everything was decided in the hallways!

What was going wrong here?

?A corporation?s values are its life?s blood. Without effective communication, actively practiced, without the art of scrutiny, those values will dis- appear in a sea of trivial memos and impertinent reports. There may be no single thing more important in our efforts to achieve meaningful work and fulfilling relationships than to learn and practice the art of communication.? ?Max De Pree, The Submerged Giant

An old farmer once said, ?Go slow. People are a lot like horses. They don?t like to be startled or surprised. It causes deviant behavior.? You can almost picture the weathered face of the man saying that, can?t you? Probably chuckling sagely at the thought of that vicious kick he took from an old mare he once startled. And as many old-timers are, he was right.

When you talk to people about big issues that affect them – and things that are going to change, you have to look below the waterline. Both the conscious and the subconscious are simultaneously at work in people?s minds and hearts?and it?s the one you don?t see that will rear up and kick you.

I had a senior level man that reported to me. He was a great faithful ? lifer.? I spent considerable time with him to share with him some of the major changes going on in the organization and how they would affect him. I knew it would be a delicate conversation because these changes involved moving him to a totally different place in the organization. I knew that many circumstances surrounding the decision would make it difficult. He felt that he was being demoted. During this meeting, I spent over an hour trying to carefully explain to this employee what the decisions were and why they were made. I allowed plenty of time for feedback and conversation. When I finished and the conversation was over, I was surprised at his reaction. He took it very well?very calmly, almost stoically. I remember thinking to myself, “This doesn?t add up.” In fact, I was so bewildered that I told the person to go home and think about it?that I wanted to meet him again in a couple of days. I was convinced that a whole minefield of issues lay under the waterline; issues that would sooner or later erupt and explode to the surface.

No, the person assured me, it was fine. It all made sense. ?No problem.? But sadly, I was right. The man went home that night and barely slept. Sure enough, issues exploded onto the surface within twenty-four hours. He later told me that he wandered the streets of his neighborhood at 3 A.M. that next morning, upset about what I had shared with him.

Fortunately, I followed my gut and my intuition – always a good idea. We scheduled a follow-up meeting where we finally got to the real issues at hand. I learned again a valuable lesson from that episode. Don?t assume people are going to take what you tell them at face value. They have a subconscious, which they usually don?t even realize they are dealing with. Once they think things through, then the implications and ramifications begin to dawn on them. If they are married, they will go home and process it with their spouse, who will have a whole different spin on the event. During such times . . .

A LEADER IGNORES ?BELOW THE WATERLINE? ISSUES AT HIS OR HER OWN PERIL.

What would have happened if I had never had the follow-up meeting? I would have wrongly concluded that everything was fine . . . and an explosion would have occurred down the road. In retrospect, it was important that I got back to the person and allowed him to go through another layer of processing. In fact, since that time, we have had numerous discussions, as I have tried to help him on the journey of accepting the change. He came along well after a lot of communication has taken place.

Part 2: The ingredients of good communication

“Within companies that effectively overcommunicate, employees at all levels and in all departments understand what the organization is about and how they contribute to its success. They don?t spend time speculating on what executives are really thinking, and they don?t look for hidden messages among the information they receive. As a result, there is a strong sense of common purpose and direction, which supersedes any departmental or ideological allegiances they may have.” (166)

The most carefully crafted messages rarely sink deeply into the recipients? consciousness after only one pronouncement. Our minds are too cluttered and any communication has to fight hundreds of other ideas for attention. In addition, a single airing won?t address all the questions we have. As a result, effective information transferal almost always relies on repetition.

It is so easy in leadership to lack focus. The good is the enemy of the best. There is so much to do! We get lost in the tyranny of the urgent.

A couple of experts have made lists that I really love, and both of them have communication as central:

The first ingredient of good communication is FOCUS – If there is fog in the pulpit there is mist in the pew. If you aren?t clear on what you are doing, don?t expect them to be!

John Kotter: “What Leaders Really Do”

Four obsessions ? Patrick Lencioni “The Four Obsessions” as well as “The Advantage”

Part 3: What to Communicate

Never assume that anyone knows anything. We cannot over-communicate, so what exactly should we be talking up during times of intense change? And what kind of communication should we foster between different teammates during the process?

Here are six basics: Six essential ingredients for good communication from the boss/leaders to the team.

The Big Vision. Be able to articulate the grand vision in one minute. People have to be constantly reminded about the dream: ?Tell us again, where are we going?? In Donna?s business, they are trained to give the vision of their product in thirty seconds! In some cases that is all the attention span you may have from listeners.

The Concrete Plans. Most people hate surprises. The more they know about plans that will affect them, the better. My leaders give constant updates on the progress of our Change Team (and on the projects groups working on chunks of the change process).

Tiny Details. The smallest change can set people off, like a married couple whose argument ignites over something as small as where Bill drops his socks. Again, the more they know, the better. As much as possible, no surprises.

Legitimize Doubt. It is OK to doubt; go toward the natural doubt that will linger in your people?s minds. Don?t run from it or deny that it is there. Speak to it and allow it to be verbalized.

Legitimize Grief. It is OK to grieve the loss of the old way. It is human nature for people to react to change with a personal sense of loss. To move forward, we have to allow those feelings to exist. People need a chance to mourn by talking freely about their loss to their leaders and to fellow teammates.

Legitimize Questions. It is OK to question; it?s only natural for people to examine your motives and your methods. Allow it. Indeed, welcome it. Be vulnerable and transparent and allow the questions to flow. I have an ironclad commitment to answer every question (they usually come via email) personally and thoroughly. It sends a healthy signal to those who work with you. We have too many meetings but too little effective communication.

I want to drill down just a bit on the issue of doubt and legitimate questions. Many a leader loses the respect of their followers because of their defensiveness.

The Four Factors of doubt:

Let me say again, NEVER ASSUME ANYONE KNOWS ANYTHING.

The most important thing in communication is hearing what isn’t said! – Peter Drucker

I remember some people saying about me, ?Hans does not listen.? What they meant was, he did not go with my suggestion and that annoyed them!

Remember that pastor who was stunned that only 23% of his church opened his weekly emails? Duh!!!

Communication takes place when the person has finally heard what you have tried to get across and can repeat back to you, in his or her own words, what you have said.

BE CLEAR!!! CLARITY IS ONE OF THE BIGGEST RESPONSIBILITIES OF LEADERSHIP. I have seen leaders that expect the team or followers to drag the information out of him or her. Expect it to happen via osmosis somehow.

?If you have an important point to make, don’t try to be subtle or clever. Use a pile driver. Hit the point once. Then come back and hit it again. Then hit it a third time – a tremendous whack.?
Winston Churchill

Learn to sharpen your own communication strategies. Most of us under-communicate by a factor of ten.

Try these five of suggestions:

Finally, What I learned in grad school a long time ago in a galaxy far far away:

Communication – the human connection – is the key to personal and career success. – Paul J. Meyer