Home » 68: Learn to Lead: Ten Skills Every New Leader Must Master: Resilience: How is Your Flexibility Factor?

68: Learn to Lead: Ten Skills Every New Leader Must Master: Resilience: How is Your Flexibility Factor? 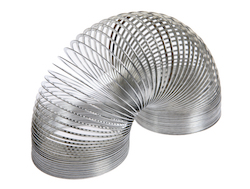 This is a continuation of our 10 part series Learn to Lead: Ten Skills Every New Leader Must Master. If you are just joining us in this series we are taking the word “leadership” and breaking it down into it’s ten letters and assigning each one a leadership skill. This week we are up to “R” which stands for Resilience.

For starters, let’s distinguish between resilience and persistence:

Resilience is different from persistence. Not just different. More critical.

Persistence is the ability to stay in the game, to not quit, to hang in there. It?s the attitude needed for the long haul?the recognition that success in our business is not a hundred-yard dash, but a marathon.

Resilience is?about?our capacity to bounce back from difficulties, disappointments, heartbreak, and hard times.

Here is some great listener feedback: Here is my answer to your question:??What is one essential skill every new leader must master????- Patience; new leaders tend to want to make the wholesale change immediately.? This is a mistake as it usually produces too much negative sentiment and pushback.? Better to wait and bring about change through deliberate & consistent vision casting for the new thing(s) and by serving one?s people in order to hopefully soften their hearts and minds to the new thing(s). ?Tim in SE Asia.

Let?s talk about?Resilience: I am holding in my hand a slinky. ?Do you have one? ?I bet you did as a kid. ?This year marks the 70th anniversary of the invention of the slinky.

Let me tell you how it all began in 1945: During 1943, as World War II raged on across the globe, twenty-nine-year-old naval engineer Richard James was stuck at the home front, testing torsion springs for use as antivibration devices in Navy instruments. Hardly an exciting or promising posting. But during an experiment, he knocked one of the springs to the floor. It began to exhibit a behavior that caused his jaw to drop. It was almost literally ?walking? across the room! James took the spring home to his wife, Betty, and asked her if she thought this strange phenomenon would make a good toy. Betty said yes. She scoured the dictionary in search of a suitable name and arrived at the word slinky, a Swedish word meaning stealthy, sleek, and sinuous. In the summer of 1945, the war over, James finally found a machine shop in Philadelphia that could manufacture his new toy made of ninety-eight coils. When the Slinky debuted at Gimbel?s Department Store in Philadelphia in 1946, both Betty and Richard stood by nervously, skeptical about how well their creation would sell. They needn?t have worried. All four hundred Slinkys for sale were purchased in ninety minutes. By the time of the 1946 American Toy Fair, Slinky was a hit and sales soared. Since then, over half a billion Slinkys have been sold worldwide. Richard and Betty became wealthy.

All kinds of things??hit??us as we are on the road of leadership. ?I always say,??Leaders make things happen. ?People try to stop us.”

During World War II, the Germans waged serious warfare with one of their most potent weapons: their sleek, black underwater vessels of destruction called ?the U-boat.? (U stands for untersse, which is the German word for undersea, a typical literal German functional description.) These U-boats wreaked havoc in the Atlantic as the Allied forces attempted to close in. The great war movie Das Boot illustrates the incredible stress of life underwater for weeks on end in one of those German submarines. When the Allied Forces detected one of these underwater warriors, they began to pummel the U-boats with depth charges. For days on end, the German sailors would be shaken up like gravel in a cement mixer.

How do you survive the rough and tumble of leadership warfare? Is it by developing a thick skin? No. In fact, developing a coarse emotional hide is the worst thing you could possibly do. I did a podcast on that! ?HansFinzel.com/61

Making yourself impervious to pain means shutting yourself off from most of the nuances and intricacies of life?and business. I?ve seen leaders become thick-hided and insulated before, and it only led to their demise. Before long, they became so well-insulated that they could not hear the whispers of common sense, interpersonal resentments, or even approaching trouble.

What would be some of the depth charges that have hit you lately? ?Things that can take you out and for sure slow down your progress: ?Here are just a few off the top of my head:

Last episode I talked about Determination -?another word being?Persistence. ?With this podcast, we are?emphasizing?something else you need?Resilience. ?Sponginess. ?The?ability to bend in the wind and not snap. The Difference between Resilience and Persistence A thanks to David Beavers for some of these thoughts on resilience. ?(check out ?Bouncing Back with David Beavers.”)

Resilience is different from persistence. Not just different. More critical. Persistence is the ability to stay in the game, to not quit, to hang in there. It?s the attitude needed for the long haul?the recognition that success in our business is not a hundred-yard dash, but a marathon. Resilience is?about?our capacity to bounce back from difficulties, disappointments, heartbreak, and hard times. My sense is that we can have persistence, but may be lacking in resilience. Resilience is critical in our business, leadership and in our lives. Persistence keeps us in the race, but resilience returns us to the right path when we get knocked off course, even knocked to the ground. Persistence can tell us not to quit, but alone it cannot stir in us the willingness and the humility to let go of our failures and mistakes, to brush off the put-downs and negative attitudes of others. Resilience is more than just being thick-skinned. Resilience is a matter of having such a big picture of and encouraging perspective on our lives, that setbacks and disappointments at the moment don?t cripple our resolve or shatter the vision we have of our future.

Bren頠Brown is one of my favorite authors. In her bestseller,?The Gifts of Imperfection, she lists the 5 most common factors in resilient people. I would like to read you part of Chapter Six:

Resilient people have the ability to deal with difficult times and still have progress in their lives. Resilient people have five characteristics in common. They use their resources, ask for help when it is needed, believe they are capable of coping, have good support systems, and stay linked to others. Spirituality is another quality common to those who are resilient. Spirituality is the belief that all people are connected in some way to a greater power, and this connection is centered on love and compassion. Those who practice spirituality have purpose and meaning in their lives. There are three essential elements of resilience. Resilient people foster the possibility of hope, are critically aware, and are able to let go of substances or situations that are used to numb feelings or lessen pain. According to C. R. Snyder, a former researcher at the University of Kansas, hope is a way of thinking, not an emotion. Hope occurs when people have the ability to make realistic goals, to figure out a way to reach those goals, and to believe in themselves. Hope is also a learned behavior. People who consider themselves hopeful are flexible and value hard work and determination. Those who are without hope feel powerless. Powerlessness is a dangerous and desperate feeling.

Again that would be from her book, ?The Gifts of Imperfection.”

Resilience not only gives us the capacity to bounce back from hardship and discouragement, but resilience also reduces our down time, and helps us to discipline our disappointments, to let go of resentments, to accept life on its own terms. We will see the possibilities and how to make lemonade out of lemons.

Resilient people not only believe in the values of hard work and persistence, but they also believe that?life itself is a gift, and that the blessings in our lives come to us not only by the?mastery?of certain skills, but also through the?mystery?of grace, through the tender compassion of someone who loves us and?all people?unconditionally.

Phillips Brooks was one of America?s great preachers in the early 19th?Century. He established schools, authored books, and composed hymns. In 1868, he published a little Christmas Carol called, ?O Little Town of Bethlehem.?

His words can help us stay centered and grounded, and inspire us to pursue our dreams and to build our leadership teams with humility, integrity, and?resilience.