Listen to this interview with Rick as we discuss our new book, and why Boomers will reinvent retirement in the coming years.

A lot of boomers we are asking the post career question, What?s next???? Our book is the answer to their question. Boomers must learn 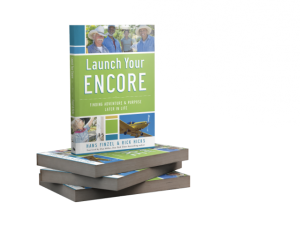 to be intentional about finding meaning and purpose in their sixties, seventies, and eighties (the 60-80 window).? With the average U.S. life expectancy reaching eighty, the authors? purpose is to help readers recognize that they are entering a new life stage, identify the positive changing landscape of late life development, and discover how they have the potential to maximize their new role as elders in this culture. ?No longer retiring at 65 and dying soon there after, people are ending up with a whole lot of life left after their main careers.

Readers of Launch Your Encore will:

A Preview from our Introduction to
Launch Your Encore.

Seventy six million of us boomers are moving into our sixties and seventies. We all know how many boomers there are ? more than a quarter of the U.S. population. On Jan. 1, 2011, boomers began turning 65. Between 7,000 and 10,000 of us will celebrate that birthday each day for the next 18 years.? The last Boomers turned fifty on January 1, 2014. Their transition will again rock the world.? By 2050, according to Pew Research projections, about one-in-five Americans will be over age 65, and about 5% will be ages 85 and older, up from 2% in 2010. These ratios will put the U.S. at mid-century roughly where Japan, Italy and Germany?the three ?oldest? large countries in the world?are today.? (Pew Research Group, Growing Old in America: Expectations vs. Reality, June 29, 2009)

Statistics show that we are living on average twelve years longer than the previous ?builder? generation.? And in the process we are redefining what is known as ?the retirement years?.?? Dr. Laura Carstensen, director of the Stanford Center on Longevity says, ?The culture hasn?t had time to catch up.? The enormity of this hasn?t hit people.?? We the authors are coming to grips with the bonus of these added years, and this book is aimed squarely at helping our aging generation in this transition toward a meaningful and purposeful later life.? (Source AARP Magazine, Jan, 2014, p.57)

Boomers have to learn to be intentional about finding meaning and purpose in aging.? Where do we find significance in the 60 ? 80 window?? How do we find that new place as we leave our main careers?? How do we launch a fulfilling encore?

During our journey of writing this book over a two-year period, we both floated up the word ?retirement,? time and again.? We mentioned to strangers and friends alike that we are pioneering new ways of looking at our retirement years for boomers who don’t really like that ?R? word.?? The comebacks were at times hilarious, chilling, confusing and enlightening.? Most of all, it underscored our observation that for most boomers and younger people there is not much serious thought or preparation for getting ready for this important life stage.? ?Retirement? is many different things for each one of us.? One older retired gentleman we ran in to said, ?My retired friends either love it or hate it.?? So we asked, ?Why do they hate it??? ?Because they have not figured out what do to and they are bored stiff.???? Here is just a sampling of other things we heard in our informal survey:

Question: What comes to mind when you hear the word ?retirement??

We found some interesting contrasts:

All Posts »
PrevPrevious24: Launching Your New Year with SMART Goals – Your Best Year Yet
Next26: The Mentors in My Life and What They Taught MeNext